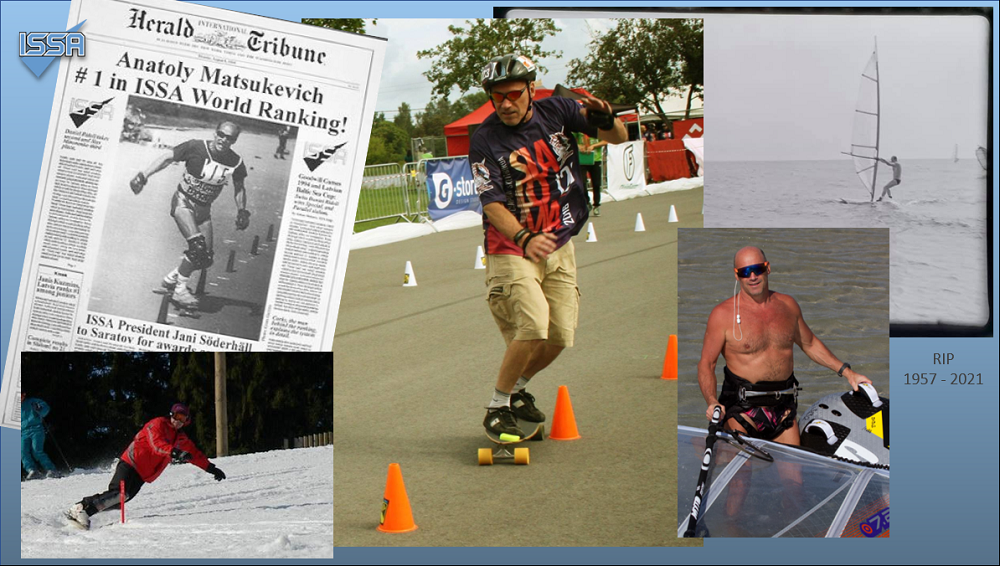 It is with profound sadness we've learned of the recent passing of Anatoly Matsukevich, Russian slalomer of Saint Petersburg, at the age of 64.

For those of you who may not have met or known Anatoly, he was THE number 1 Russian slalom, and on the local scene, he was pretty much unbeatable for a good number of years. Sharing his love for the sport across the former states of the Soviet Union, the popularity of slalom racing spread, and eventually, younger talents in Latvia, Ukraine, Russia, Estonia, and Lithuania started reaching his skill level and occasionally leaving him a millisecond behind. For those who achieved that accomplishment, those moments are well remembered. And it didn't happen many times, in fact, they could certainly be counted on the fingers of one hand.

Who would have thought that such an American sport would, or even could, gain any popularity in the Soviet Union in the 1980s? Somewhat surprisingly it did, even behind the old iron curtain. With no possibility of importing skateboards, millions of completes were made locally and these boards had amazing steering abilities, with high, unstable trucks with soft bushings.

These decks, from brands such as Rula, gave the locals an edge when it came to extremely tight slalom courses, and among the classic ones are 100 cones set 1 meter apart (just over three feet), probably nobody ever beat Anatoly in that discipline. The English were famous for tight courses, but in Saint Petersburg, Anatoly was pushing for ever more complex courses. And why put the cones in a line, when you can place cones put pretty much anywhere. The figure slalom discipline was invented, with cones placed at around 1 m apart, often in a somewhat symmetrical pattern. Anatoly excelled once again, with turns and elegant pirouettes unimaginable on any other type of skateboard.

When the first ISSA World Ranking was published in 1994 Anatoly became our first ever #1 ranked slalom racer. His perseverance and passion was officially recognized!

Other passions of Anatoly were windsurfing and snowboarding and he was teaching also in those sports. Active in snowboarding, Anatoly was handpicked to participate in the volunteer force at the 2014 Sochi Winter Olympics where he was working the slopes preparing for the world elite in yet another slalom discipline.

With the revival of slalom racing in the 2000s, Anatoly was once again back on the racing scene and sometimes travelled to international events including several World Championships and European Championships. Although he would no longer be able to claim any victories his motivation and passion was always present.

Anatoly leaves behind his wife Nina, daughter Dina and son Slavik.
Our thoughts are with his family at this difficult time. 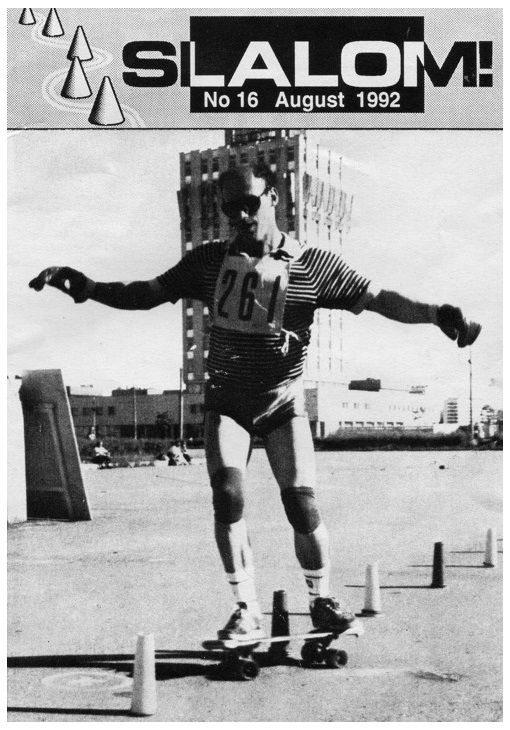 Анатолий Мацукевич, one of the most titled and famous Russia/USSR slalom skateboarder, has passed away at the age of 64.
Back in 1980s he was the pioneer of Russian slalom, organized a large number of competitions in St. Petersburg, promoting skateslalom culture in Russia.
Anatoly won numerous competitions in Russia in the 80-90s, repeatedly won prizes at European Cups, World Championships.
He was engaged in slalom competitions both as sportsman and organizer until his old age.
It is a tragic loss for the slalom community not only in Russia but worldwide as he was one of the most devoted skateboarders, always helping with his advice and experience.

Sincere condolences to his family.

At the end of August 1987 in St. Petersburg, I got to a big competition for the first time and had the opportunity to see all the best skaters in the country. And among all the best Anatoly Matsukevich was the best, at least square. I was impressed to the bottom of my heart... I decided I wanted to achieve that at one point I could fight it equally and that desire gave me the motivation to train my best and grow in terms of craftsmanship. It's been a few years and I started to work out sometimes, at least standing on tiptoes, with the tips of my fingers to reach the top on which Anatoly lived... And I am eternally grateful to him for our competition.

You can say that the legend has left, but if you think about it, legends do not leave. They move to another dimension and continue to exist in our hearts and thoughts and give us the motivation to move on. 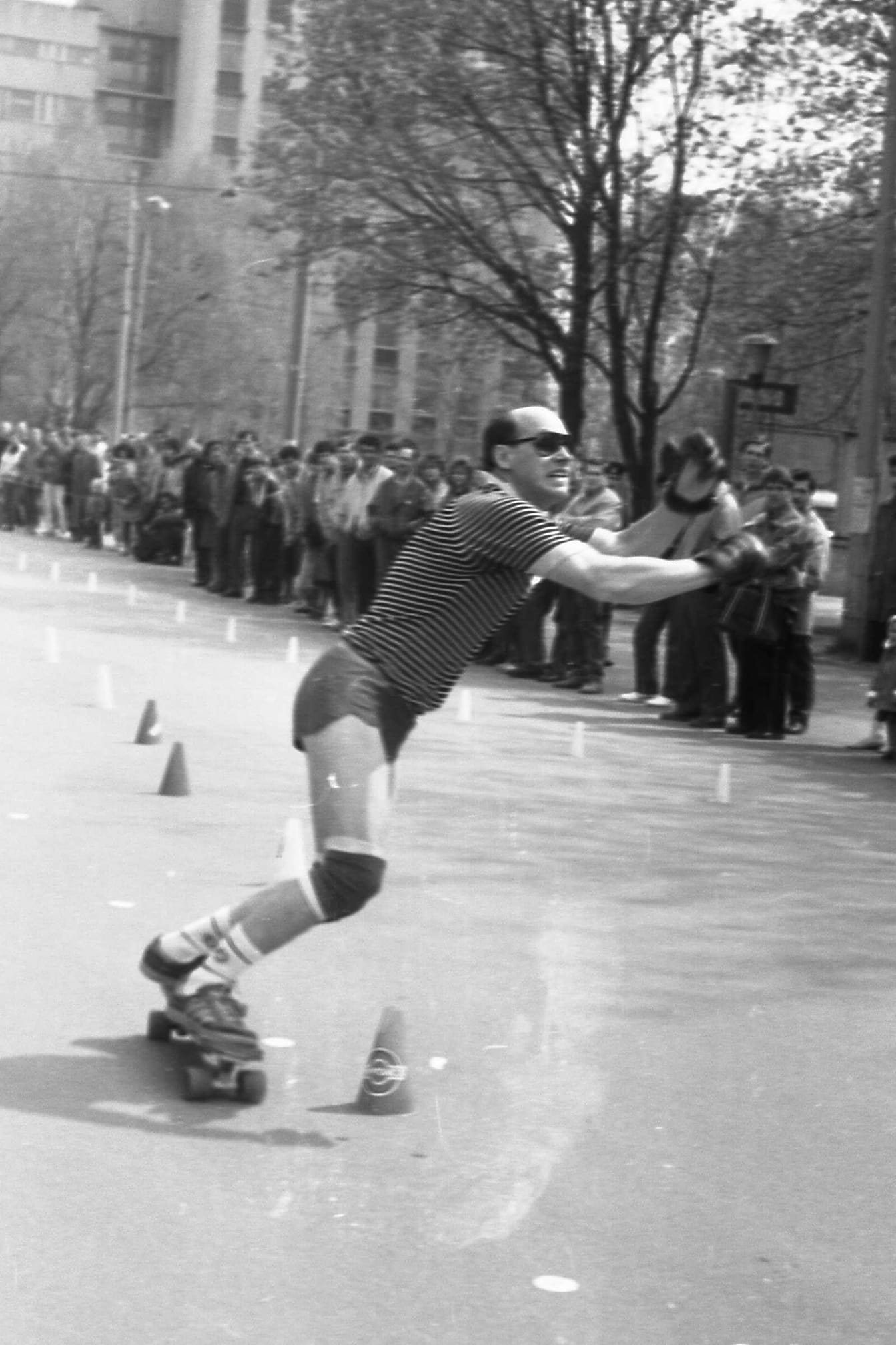 Stas, thank you for your good and accurate words! Anatolij truly is a legend. I had heard about him long before I ever saw him in action. For us who back in the 80s were limited to competing only on this side of the iron curtain, he was the ultimate competition to beat. How iconic that you have posted a picture from the race which was the only time I managed to beat Anatolij in head-to-head finals in Harkov, Ukraine! Great memories! ❤
Top 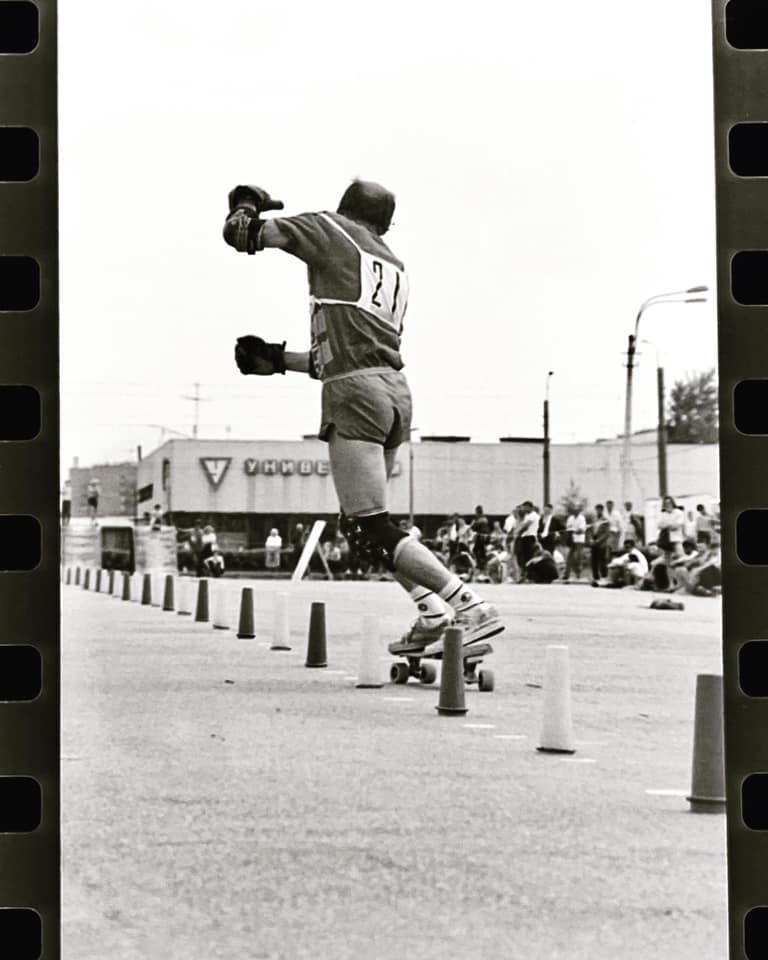 Anatoliy Matsukevich helped bring modern skateboarding to Russia and the former Soviet republics, which represent 1/6 of the Earth’s land mass. He passed away this week after his battle with cancer. He was 64.

I met “Tolik” in 1992, when he invited me to St. Petersburg for the Russian Cup skateboarding competition he was organizing. I was astounded to learn that in the two years since I was in the USSR as an exchange student, they went from no skate scene to a full-blown regional competition with skaters coming from all over the former Soviet Union to connect and compete in street, freestyle, ramp (sorta big mini), and of course every obscure discipline of slalom—Tolik was an ISSA world-ranked slalom racer. He also had the attention to detail and drive to push through the bureaucracy that persisted after the breakup of the USSR, and the credibility with both the authorities to get permission and with the skaters to bring the region’s best out to participate. It was a delicate balance that he struck perfectly.

The following year he put a team together to travel to California for the annual Thrashathon, which he sold to the Red October munitions factory in St. Petersburg as a major international competition. So, they sponsored the trip to ensure Mother Russia was represented! That was a week I’ll never forget, chaperoning my friends between San Francisco and San Diego, visiting skate companies, getting a personal tour of the Powell Peralta and BONES WHEELS factories by #GeorgePowell, and hitting all the skate spots in between. Straight off the plane in SF, they said, “Take us to EMB,” where they stood in the #Gonz Gap as James Thomas ollied over them. 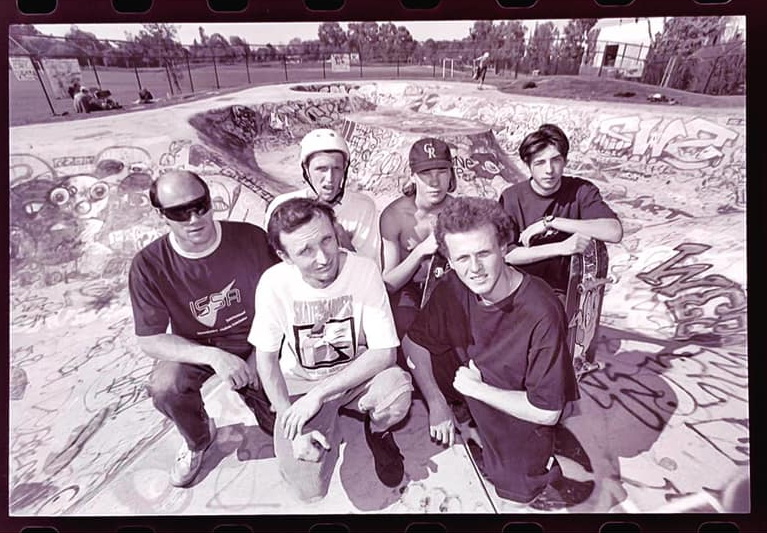 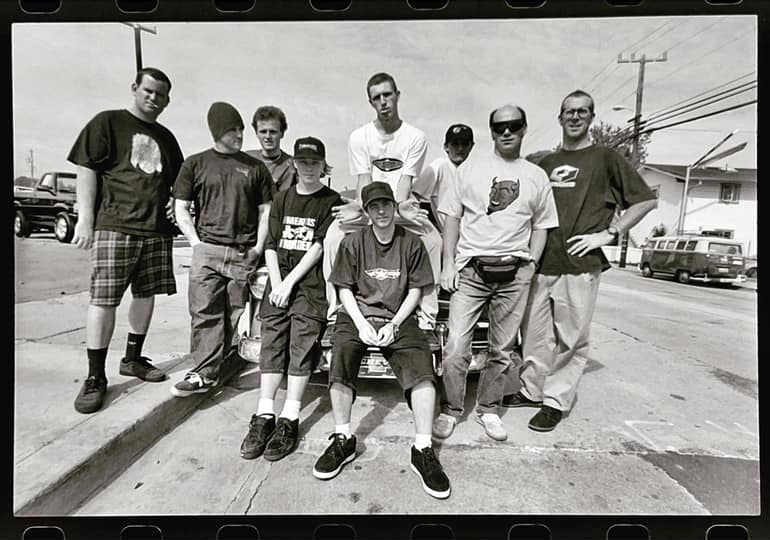 In 1994, Tolik asked me to help organize an American contingent for the #GoodwillGames, which were taking place in St. Pete and included skateboarding as an exhibition sport. I arrived with a group from CASL Usf, plus #RodneyMullen. They were featured skating in Palace Square—site of the 1917 Bolshevik Revolution—on Russian TV as part of the GG opening ceremonies.

In 2001 I returned to Russia with Rodney, but this time we brought Kenny Reed and Marc Johnson and covered the trip for TransWorld SKATEboarding mag and the #ONVideoSkateboarding documentary series. Russia would become a regular stop for American pros on tour, with all the polished granite street terrain that was available. But it took a domestic skate scene to attract foreign talent to come, and in the beginning, Anatoliy Matsukevich was there, building the Russian skate community, and also keeping the skaters from neighboring Ukraine, Latvia, Lithuania, Estonia, Belarus, and other former Soviet Republics connected. And he connected all of them with the rest of the world to show us that skateboarding was much larger than we knew.

Watching skateboarding in its first Olympics this summer, I hope he recognized his part in that achievement. No one else could have done what he did, when he did it. And it made all the difference for those skaters, for the international skateboarding movement, and for a kid journalist from California who was there to document it and see it for what it was—a revolution.

We all know now, after the Tokyo 2020 Olympics, that skateboarding is a truly global phenomenon. But it took a true visionary like Anatoliy Matsukevich to see it then in a place where it hardly existed, and to make it happen. Skaters around the world owe Tolik a huge debt of gratitude as one of the true unsung champions of skateboarding, a hero of our time. Thank you, my friend.


This is another fragment with my father from a competition in Riga, Latvia.
You can see him here at 1:50 second and this is a cool thing: at that same time you can hear "LL Cool J - I Need Love" song. Also you can see crazy flamboyant looks of skateboarders.


I can't believe it, what terrible news! Anatoly was so fast, stylish and friendly man. The greatest USSR slalomer! RIP Anatoly

All the old Italian school, including Luca and myself remember Anatoly very well and say, to the family and to all his friends, their prayers for him. RIP