These are the guidelines for the conejudges at the Trocadero event. I'm posting them here so that they can be used at other events (if you like the idea).

1. A cone IS considered “hit” if:
a. The racer knocks it over.
b. The racer pushes it beyond the inside edge of the circle.
c. It has been knocked over, or knocked outside the circle, by another cone on the same course.

2. A cone IS NOT considered “hit” if:
a. It remains standing and touches the inside edge of the circle.
b. It has been knocked over, or knocked outside the circle, by a cone from the opposite course.

3. Cone count procedures:
a. As soon as the race has ended, count the cones hit in your section of the course.
b. Raise the corresponding number card overhead, and keep holding it up.
c. Wait for the judging official at the top of the course to raise a green card.
d. Put all hit cones back in their proper place.
e. Display your green card until the next race begins.

4. Raise your red card to indicate a DQ (Disqualification) if:
a. A racer misses a cone.
b. A racer puts a foot on the ground (as in a fall).
c. A racer does not pass the finish line.
d. A racer passes on the wrong side of the cone without knocking it over.*

5. Raise your red card to indicate an emergency if:
a. You haven’t had enough time to put all your cones back in their proper position.
b. A person or object has obstructed the course.

7. If the judging official raises the “C” sign, check again to make sure all your cones are in their proper position. Then step back and show your green card.

8. If the judging official raises the “T” sign, the timing equipment needs to be tested. (No racer will run the course.) After hearing the start signal, the cone judges at the finish line must step on the finish line strips two or three times. The test may have to be repeated several times.


*To avoid going around a challenging cone, racers will sometimes intentionally hit it from the wrong side. (This is called “Criddling.”) A racer is not Dqed for doing so, as long as the cone is knocked over or out of its circle.
Last edited by Jani Soderhall on Mon Apr 07, 2008 10:41 am, edited 2 times in total.
Top

Jani,
We are looking to implement the cone counting procedure described here at next year's Dixie Cup race. Is there a card supplier out there of do you just make them out of whatever you can find?

Each judge needs cards numbered 1-10 (if they are assigned 10 cones) and a red and a green correct?

Do judges only judge one lane in dual slalom?

Thanks for the info,

The best is to print large digits (as large as you can) on a white sheet. Print two of each. Then take one 1 and one 2 and put them together and then melt them together with plastic around them (I don't know the term).

Make sure you put the digits so that they show the same value in BOTH directions. It is important as half of the audience may be above and half below. Also, you often have the racer at the bottom of the course and the time keeper at the top.

Here's how our sets are put together:

Got any photos you can throw up for me to look at?

Sorry it took a while to post these, but here they are!

We used to make signs out of cardboard pieces, but they didn't last long, so a couple of years ago Corky and I went into my dads print shop and came up with the following signs made of durable, washable plastic sheets bound together with a metal spiral attachment at the top. The pages can be turned over and the idea is to display the same message (a number or a color) in both directions. 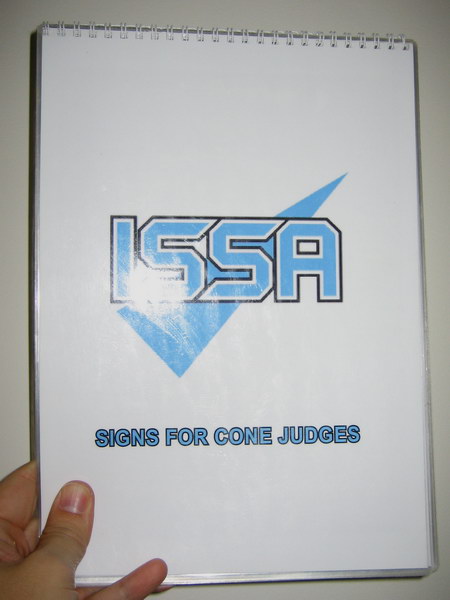 First pages on the inside of the cover has the complete set of instructions on how to display the number of hit cones. Rules were printed in both English and French as their initial use would be at the Paris World Cup. 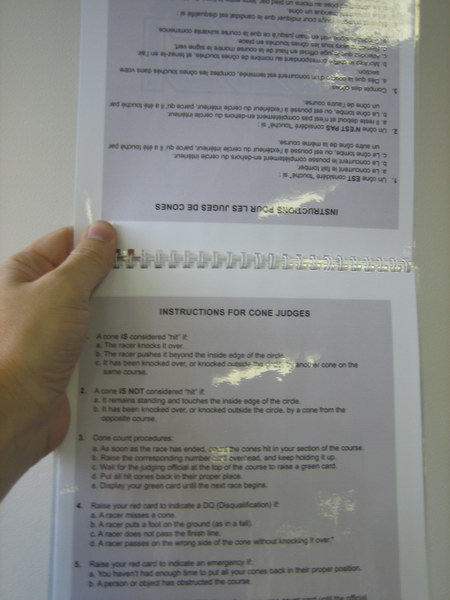 This is the key to the numbers. As you turn the pages the "number" is showing in both directions. Takes a little bit of organization to get it sorted before putting the sheets through the plastifier. It's much easier if you print double sided pages to have just one sheet to plastify. If you have two sheets, there's too much air in between and they'll last less long 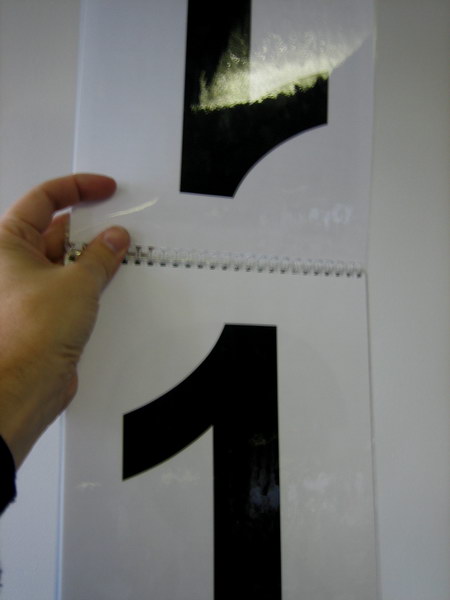 Here the booklet is completely folded and can be held up high to show it to the judges table. Make sure you print the digits as large and bold as you can. Every mm in size matters here when you hold up the signs from a distance. 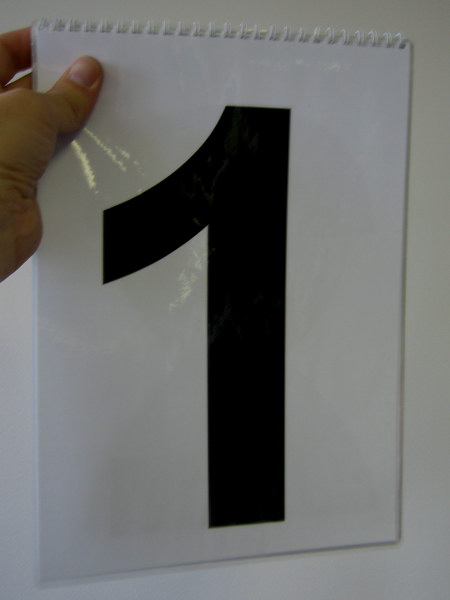 The Red sign can be used to show a DQ. The Green sign is used to show that it was a clear run and that the course is ready for the next racer. We put two colored papers into one sheet here, but ideally we should have printed green and red color onto a single paper sheet (to avoid the air between the two sheets of paper). 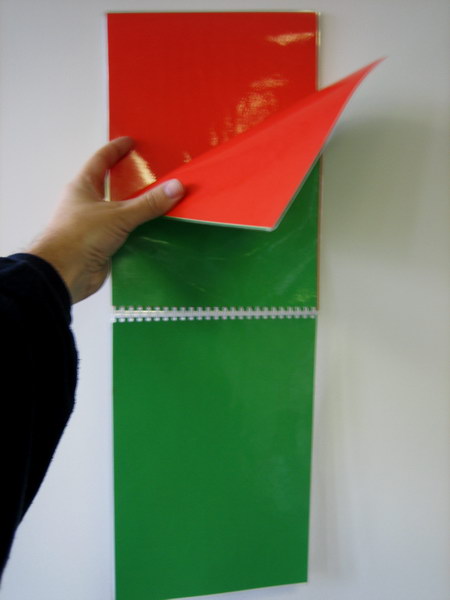 The back cover has a piece of advertising on it. Get your own sponsors and have them pay for your production! ConeRacing.com paid for these. 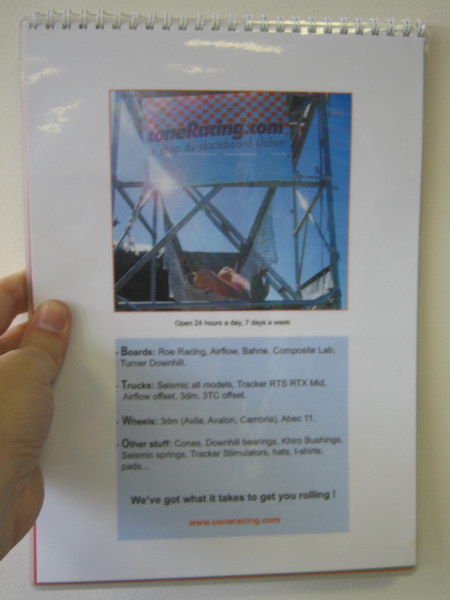 The pictures are of lousy quality but I think you get the idea.

The original idea came from John Gilmour who had found some plastic sheets with numbers all attached at the top. They probably came from a store or a gas station where they could be used to display a price of a product being promoted. The only problem with these were that when you held them up they were displaying one number in one direction and another in the other, thus the skater down at the bottom would see one number while the cone judges would see the others, so they were difficult to use. But one good idea led to another and this is now probably the best there is to handle the cone judging.

The numbers I used came from a large chain store of office supplies called "Staples". In fact almost any huge warehouse style store has these numbers to display prices for their items.

You could certainly ask stores for their dirty ones...As they have no want for any durty numbers.....besides ...after a single race they'll be dirty anyhow. If you feel like putting in time to clean them you can.

You could then glue the numbers together as Jani as mentioned so that only 1 number shows fromt to rear. You also end up with thicker and more durable numbers this way.

Some stores have extra large ones and and a fwe smaller sizes. Let the largest numbers be used at teh bottom and smaller ones at the top....in case you can't get all big numbers.

these booklets are very efficient, one quality is they are just stiff enough to stand on the floor, so we usually put them down standing on the floor with figures visible while we set cones back in position. i think all it takes, including plastification is available in serious copy shops.
http://etiennedebary.blogspot.com
Top

I'm about to reprint the booklets for the cone judges, and welcome any comments upon these. Also, may I ask the ISSA rule committee to review the above texts for compliance with the 2008 rules?


4. Raise your red card to indicate a DQ (Disqualification) if:
a. A racer misses a cone.
b. A racer puts a foot on the ground (as in a fall).
c. A racer does not pass the finish line.
d. A racer passes on the wrong side of the cone without knocking it over.*

Are there other situations worth mentioning?


5. Raise your red card to indicate an emergency if:
a. You haven’t had enough time to put all your cones back in their proper position.
b. A person or object has obstructed the course.

Maybe we should add that the Red card should only be shown for these reasons BEFORE the racer is in the course. After we may need some other means of communication. Suggestions?


Thanks for your help!

With the newly-approved No Cone Penalty/Max Cone Count rule the only card a cone head would need is the red one. Good runs require nothing, no need for cone counts, DQ gets a red. I would guess, though, the green card would be practical as a quick way to notify the starter the course is reset and ready. No need to leave the table hanging wondering if everything is ready to go.

I thought there was a PDF version of this somewhere. I want to get some more printed to make sure we have enough!!!
Many Happy Pumps!
Top

I just made an update to the Cone Judge booklets. Nothing fantastic compared to my own old ones but better than those we had online here at this site.

Note how the two pages of each do NOT show the same figures or color.
This is very important to remember when you print the pages.

- Ideally print on both sides of a single paper (quite thick so you can't see text on the other side). That avoids air in between the two pages and once plastified they'll last a life time. The green and red are ideally printed, but if you don't want to waste ink in your printer, get hold of colored paper and put them together.

- Make sure you print the figures/pages according to the instructions so that when you have the booklet folded you show the SAME figure towards the top (for the judges) and towards the bottom of the course (for the racers). This is really important to have to have the same figure shown in all directions and be in accordance with the announcers statement too.

- Wire bindings (circular metal) are better than plastic bindings as they allow the pages to be complete turned over. The also last longer as the plastic tends to break easily. 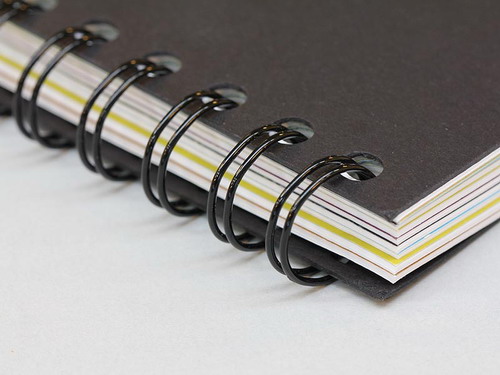 - If you need a quick solution you can use a simple key chain and just punch a hole in a corner of each sheet. 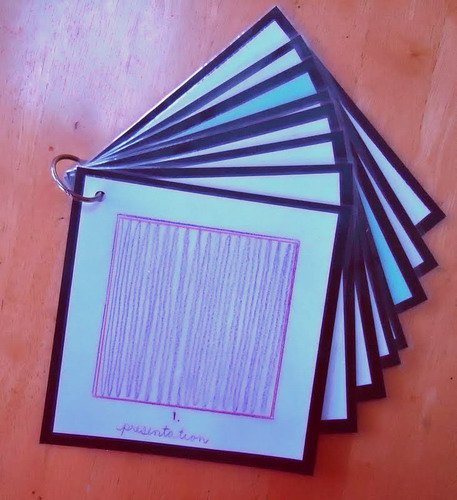