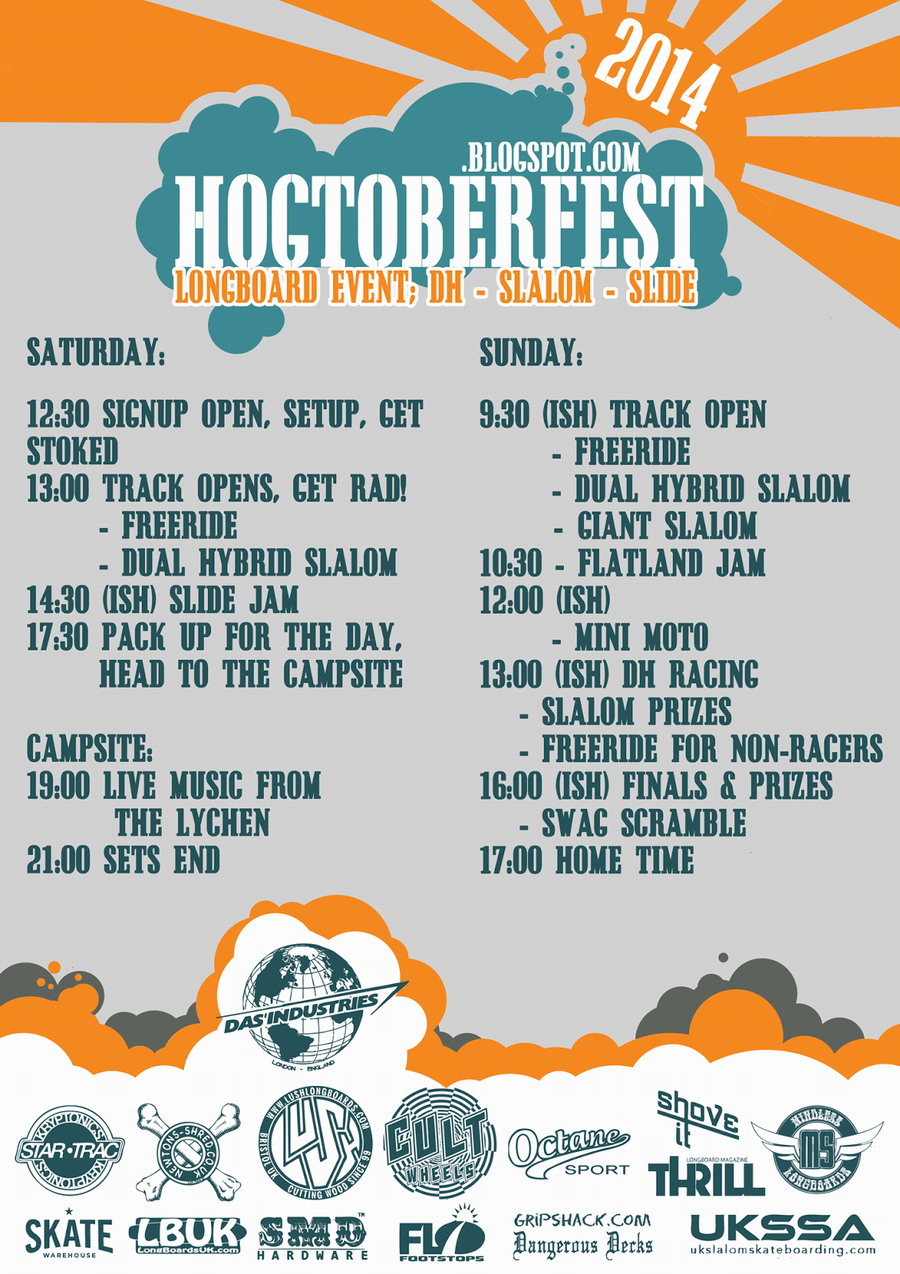 Hogtoberfest Slalom
Day 1 Hybrid
Well we almost finished set up before the rains came and gave the track a soaking. However after the customary rain break Hog Hill fare – coffee and bacon sarnies – the sun obliged us with its presence and began to dry the track. Set up completed the Hybrid qualifying started.
We welcomed racers Victor Mårtensson and Kaj Gustafsson , joining us from Sweden as well ISSA president Jani Soderhall and family.
A special mention to Alfie Osborne who completed his first ever ramp start today and went on to qualify in very respectable 13th place – with great style too, well done.
Qualifying in the can we went straight in to the A Group, despite the sound of distant thunder the sun shone on and let us race.
Tomorrow we begin the day with the B Group Hybrid followed by the GS.

Slalom - Day 2
B Group Hybrid and Giant Slalom
The day began under grey skies and stayed that way all day in contrast to the sunshine the previous day. Set up was rapid and so the B Group Hybrid was soon underway. Note to self when racing from the timing table make sure you take your reading glasses off first it helps to see the course! (“Senior moment” alert!). As ever there were some good close races. In the final John lost to Jani’s eldest son Dimitri after DQ’ing his second run.
As soon as the Hybrid was over one of the ramps was turned around 180 degrees and timing connected to allow the Giant Slalom practice session to begin. The strong headwind made a huge difference in times. But going it to the last few runs it was if a switch had been flicked and like the start ramp earlier the wind had done a complete 180 and was now a tail wind. In the battle for the top spot this proved a critical factor. Mmedo’s clean run time of 23.20 earned the World Amateur number 3 his first Hog Hill GS top podium spot. Louis came close with his raw time of 23.22 but with one cone penalty too he had to settle for 2nd. Visiting Swede Victor Martensson took the remaining podium place his time of 23.74 having led for much of the way.
Big thanks as ever to everyone at Redbridge Cycling Centre for having us.
Thank you to Timmy Peters and DAS Industries for all of your hard work in getting things organised, to Michael Stride and Octane Sport for supplying the ramps, timing and logistical support. My thanks to Mark Phelps for helping out with the timing and doing the pen work at the time table, to Paul Coupe and Gavin Palfrey for all of you help, To Edwin for your invaluable assistance and "voice" in the cone counting dept. and to Louis and Mmedo for the courses. Thank you to all of the events sponsors including Kryptonics, Octane, Lush and Skate Warehouse. Finally a big thanks to you all that came and raced and supported the event.

In 4th place Jose is Joe Baldwin, this was his first GS race I believe.

Thanks, edits done. It's good to have it correct for the ranking, avoids double registrations and such problems. Jani
Top
Locked
3 posts • Page 1 of 1