My Ramp Starts Suck, So I Built a Start Ramp For Practice!

My Ramp Starts Suck, So I Built a Start Ramp For Practice!

I'm a firm believer the only way to get better at anything is to PRACTICE. This explains why I am such a lousy piano player and worse with the trombone: I never practice. Sometimes, though, providing the necessary means to accomplish some endeavors requires extraordinary measures.

Thus was my plight when it came to RAMP STARTS. No doubt about it and no need to hedge one way or the other: I SUCK ON RAMPS. I'm not embarrassed or recalcitrant because of my lack of transition skills, just realistic. I don't ride ramps, don't execute transtions so why would I have ever acquired any sort of skill to do it?

Unfortunately, it's becoming very clear that to compete in the 21st Centuary at slalom skateboard racing at the national or even regional level then a strong, consistent, aggressive ramp start is needed to at least belong in the ball game. Getting three runs before a race is not the time to practice when you're on the ramp and 30 skaters are lined up behind you waiting for their turn. Besides, race day is NOT the time to start figuring out what it takes to be in the race. Race practice is about learning the course and determining the fastest line, what to criddle and when to double pump. So what's it gonna take to do all that? Simple: gotta have a ramp for practice.

So I built one. 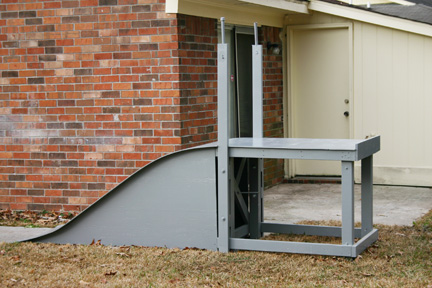 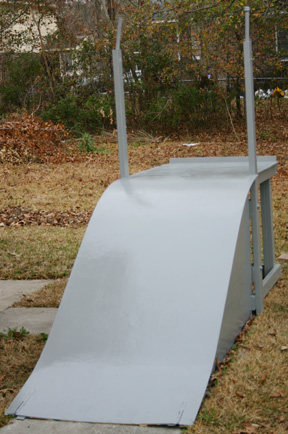 It's not really that big of a deal if you have a storeroom full of power tools and the ability to decypher some simple plans. I e-mailed Byrddog and asked for a copy of his ramp layout and he was quick to forward a copy. After that it was just a matter of measuring, sawing, drilling and nailing. Total cost in parts was about $100 with a big chunk of that going to a gallon of primer and a gallon of polyurethane deck paint. Like I said, this is really kind of easy if you got the tools. If someone tried this, though, with just a handsaw and a hammer, we'll send a coroner later to gather up the fossilized remains and say words over your grave!

I got a pretty decent spot for the ramp. It's permanent and is for nothing else than to get on, get down strong and get off. Over and over. I have a long, wide driveway to the street and a sidewalk coming off that to the back of the house. So It's about 120 feet of concrete. Just long enough to lunge hard and run out without heading into the street. It's nowhere near long enough to set more than two or three cones, but more than enough for practicing ramps starts. That's all I need. Oh, and did I mention I have to figure out some sort of technique for skating in a parallel stance and getting down a ramp? 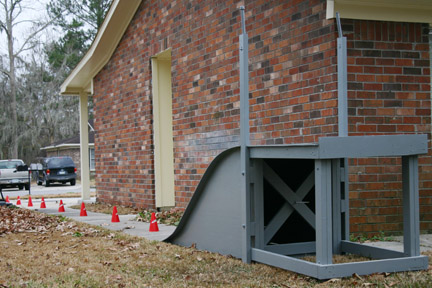 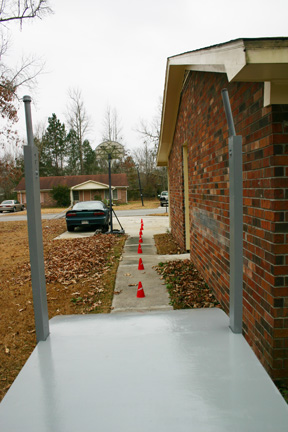 I was always intrigued how Bobby Piercy got down a ramp with his stance. I've seen him on a ramp at the start in several photographs and a few photos of his down the course long after the start. Never saw a photo of his on the ramp and transitioning. Then, I saw the WIDE WORLD OF SPORTS rerun of the Catalina Classic on ESPN CLASSIC. Piercy raced Hutson off a start ramp and won! . . . he also skated down the street in Avalon with a wide open surf stance. He didn't use any sort of parallel accommodation to get down the ramp. So I don't know what he did.

I figure I got two options and have to settle on one or the other as a race technique. One is to stand on the ramp in a solid parallel stance and then figure out how to transition down the ramp in such a posture. The other is to work on something Bobby Damnarino suggested to me in Georgia in 2003 that I really want to work on: Place one foot on the board in the proper position and the other farther back for a more stable stance for coming down a ramp. Then, immediately upon hitting the street, sliding (or slamming quick) the back foot FORWARD to it's position farther up the board. Beats me which will work best, but I've now got the means to work it out! 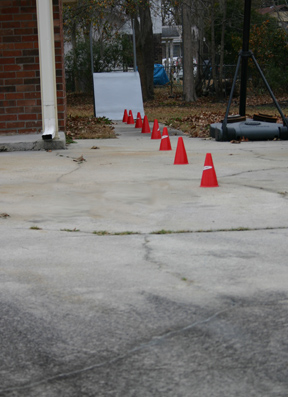 At least I'll have the opprtunity now to work out something that might allow me to keep racing the way I like and be able to take full advantage of the race experience without appearing to be a total waste of white meat.

This may sound a little specious, but I'll certainly make this offer anyway. Anyone who feels like they also need any time to work on their starts, their transitions, their reaction time on a ramp or anything related to this aspect of racing is more than welcome to spend as much time as they please on my ramp. I know I live 500 miles from everyone and just "dropping by" isn't really an option for anyone, but making the offer is the best I can do. Of course, being 500 miles from everyone is the biggest reason I had to build my own ramp. It's not like I can run over to Byrddog's house or hang out with Tway and put some time in on their ramps. When you live in the wilderness (slalom skating-wise, that is,) you just gotta do what you gotta do.

I also want to say thanks to Mark McCree for offering to take up a collection at the Luna Slalom Jam so as to pay for me to get a start ramp for practice. After a couple of pathetic efforts trying to get off Byrddog's ramp, McCree yells out to a crowd of well over 30 skaters, "let's all make a donation and pay for Tucker to get a start ramp at home so he can figure this out!" I'm happy to say, though, that I was able to handle it without resorting to any sort of philanthropy.
Last edited by Wesley Tucker on Tue Mar 16, 2010 8:07 pm, edited 1 time in total.
Top

The Lords of Dogtown will feature ramps built from those same plans in a downhill scene that is being added to the film. Adrian, Bill, Stan and mysef will be on the set Tuesday in LA.
Jack Smith
www.theskateboardersjournal.com
www.lowesyndrome.org
Top

I have to admit, though, that my parts list might look a little more extensive than what Ricky, 66 or even Troy Smart did building their ramps. I bought a lot of 2x4" and 2x2" because my ramps is built SOLID and isn't transportable. So it's got lots of 2x2 slats supporting the "S" ramp (one every 6 inches) and 2x4s bolted together into 4x4s to support the corners of the take off platform. And then you can see all the cross bracing and such that's all 2x4, plus to pull-off handles on the top of the ramp. Plus, it's always going to be outside and I wanted it to last longer than just one monsoon cycle before it rots away. So I painted it with lots of urethan deck paint. That sucker is SEALED in plastic. It's going to be a while before it starts to show any affects of permanent humidity and constant rain through the spring and summers ahead. I also took the time to use bolts and wood screws in place of nails. I really don't want it shimmying apart after a few pull and then I have to grab the hammer and start knocking it back together. Screws and bolts eliminate all that from woodwork.

By the way, those are South Carolina lumber prices. I've been told that in other parts of the country, it might not be as cheap. Then again, we got pine trees around here the way Iowa has corn and Nebraska's got wheat. Anything lumber-wise here is like buying dirt.
Top

how do you call it ? Needle race track ? How about some offsets ?

The great thing would be to find a way to build a ramp that grows higher and tighter as you grow better and more confident. Pierre Samray did something like that in Antibes, a (fast) 3 parts ramp with a removable center part...
http://etiennedebary.blogspot.com
Top

Very good job.
I didn't participate the STockholm Championship mainly because I am not able to go down from the ramp. I need training.
No training --> nothing. I fully agree with you.

Can you dismantle and transport it?

Wesley- any chance you could reattach your images? I'd love to see the ramp you built as it is about $100 cheaper than the one I built...
Top

willy demis wrote:Wesley- any chance you could reattach your images? I'd love to see the ramp you built as it is about $100 cheaper than the one I built...

willy demis wrote:Wesley- any chance you could reattach your images? I'd love to see the ramp you built as it is about $100 cheaper than the one I built...

Awesome! Thanks a lot. Wow, you have (almost) inspired me to put in a sidewalk at my house. How convenient to have the ramp set up and ready to go whenever you want to practice. Freak'n nice!
Top

Now you just need to build a 9' version of that!
Top

Gary Fluitt wrote:Now you just need to build a 9' version of that!

Heck, go TWELVE feet now and it won't be obsolete in two years.

"All the money in the world can not buy sharing the excitement of life with other people. Nothing else matters."