Hello everybody in the slalom skateboard community,

As we have already announced we are about to create a new international work group for slalom under World Skate (WSK). With slalom racing as one of the official disciplines of WSK, we're now preparing for our participation at the World Skate Games (WSG) in Argentina 2022. WSG is a multi-sport, multi-discipline event organized by WSK every second year. At WSG 2022 there will be Vert, Downhill and Slalom for skateboarding, while Street and Park will have their own separate events. The dates for WSG 2022 are Oct 24 - Nov 13 and will be hosted by the cities of Buenos Aires and San Juan.

The qualification for these Skate Games is more formal than what we are used to in the slalom community.
And with a new year starting we want to present how it's going to work. National associations being the base of World Skate are a natural part of the Qualification, so we have integrated possibilities for them to determine who should represent each country.

The pandemic situation in the world is still in play, so it's important that you already start to plan for national qualifications to determine the top three men and women in your country. Here's what is needed in terms of preparation:

For the top 20 on the world rankings, even though pre-qualified, they also need to register individually, to confirm their participation. The deadline has not yet been decided but we expect it to be two months prior to the WSG, so end of August or early September. For those of you who do not have any national association connected to World Skate contact ISSA and we'll help you check what options are available and help you register.

Finally to clarify the roles of the different organizations and joint efforts, here's an overview:

ISSA (International Slalom Skateboard Association)
Has been the international skateboard slalom association for decades. It has held together the slalom skateboard scene with organizing the yearly slalom events and world rankings. With its forum, website and social media it has kept the slalom scene rolling over the years. We are now joining forces with WSK so that all ISSA activities can migrate over to become WSK activities.

WSK Slalom Skateboarding Work Group
A slalom work group comprised of 3 people from WSK and the 7 members of our current ISSA BOD. This is the group who will speak for international slalom skateboarding into the future. The formalities of this group are being finalized and will be officially announced soon by WSK and ISSA.

World Championships
In the years when WSG is held that event is considered the World Championships for all disciplines participating. The other years "in-between" we'll hold separate Worlds for slalom racing, starting in 2023. They will eventually be sanctioned by World Skate but until those formalities are in place, we'll sanction Worlds through the ISSA as we have done in the past.

Continental Championships
There are plans for continental championships organized through World Skate, but it's unclear when and how they will be organized. The continents would be like for the Olympics: Americas (North and South america), Europe, Asia, Oceania and Africa. In the mean time we will have, as before, North American Championships, European Championships and then nationals in Japan, Australia and Brazil. 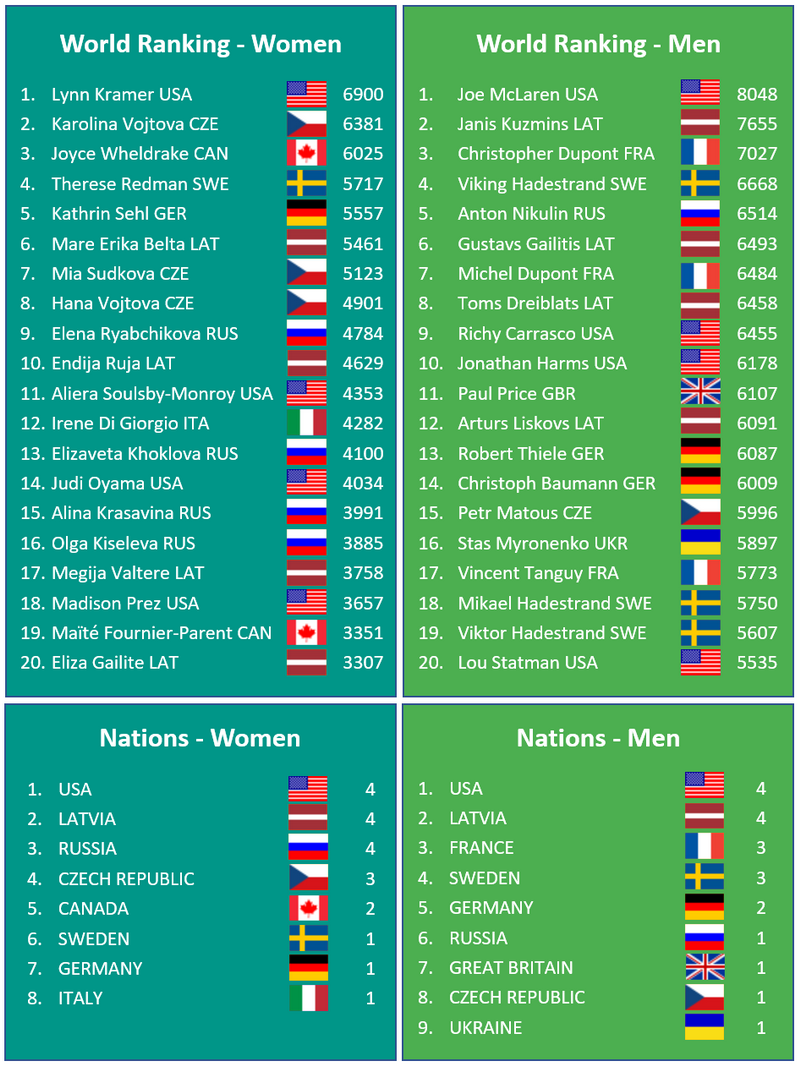 Following the announcement of World Skate, March 3 (received by the ISSA April 1), in relation to the war in Ukraine, no Russian, or Belarus skaters, or officials, will be allowed to participate in any races organized by World Skate. Also, World Skate announced that no World Skate sanctioned events will be held in either Russia or Belarus. This decision is valid until further notice.

Hi Jani and all, hope everyone is doing well!

Is there any actual information about this event? I can't find it anywhere. If there is information, could a link be provided please? Perhaps I've simply missed it somewhere.

- When will the Slalom be exactly? The games run from 24th October to 13th of November, but presumably slalom will only occupy a small amount of that time. The race doesn't seem to appear on the ISSA calender.

- Where will it be? The games are advertised as being in both San Juan and Buenos Aires, but these are on opposite sides of the country. In which city will the Slalom actually take place?

- Entry costs, accomodation, food, travel to and from airports etc? Is anything provided or organised by the event organisers or do individual teams/competitors need to make all arrangements themselves? Any detailed information about the event.

- Is this event actually happening? As far as I can see there is nothing at all on World Skate's own website other than a basic holding page with the dates, nothing else.

If the ISSA has any more details about it could it be provided please, or if not is there some way the ISSA can make contact with World Skate to ask them for further details as it's very important to anyone wishing to attend.

You are right to be asking all these questions. But let me reassure you as much as I can. It's on!

I don't have any say in the overall organization, but I've had several meetings regarding this event, sometimes going into very detailed planning. As to your detailed questions I'm afraid I can only really confirm the location: San Juan is the city for slalom and downhill. Probably it was selected the for mountain roads that can be found there. We don't really need those kind of hills, but the logic was that slalom and downhill should be held together.

I was recently told that an calendar would be presented end of May, but it's now looking a bit delayed.

Our plan is that slalom will take place over 5 days, with three days of racing, and two days for visits or potential weather delays. So expect to stay about a week on location. However, we have no indication yet whether that'll early or late within those announced dates.

We plan for three slalom events: Giant, Hybrid and Tight. There will two classes: Men and Women.
There will be a live broadcast from each event, at least from the finals. Available through "Worldskate TV".

Skaters are supposed to take care of their own travel arrangements, ideally coordinated through the national federations. For organizers travel plans are made by the host city. Given the large size of the whole organization, I hope that there will be some facilitation for transport common for everyone.

Registrations are also meant to be handled by the national federations, so you should reach out to them to make sure you're on their "lists". If they don't agree to pay the travel (or help you do so) you should at least have them cover the registration fee (USD 150). The formal registration will open 2-3 months prior to the event, but we will use the SlalomRanking sign-up to keep track of who's expected to come and make sure we get all skaters properly registered in time.

That's pretty much all I have at this moment, and we'll try our best to share the information we have going forward. Rest assured that we're equally interested in getting confirmation as to the exact travel dates etc.

Thank you very much for your detailed reply, I really appreciate it! I will continue to keep an eye out for any updates. In the meantime, thank you for all your hard work and dedication to this new project, and also of course to all the other board members!