Does 161 have a truck or is it developing a truck?

I checked the link to the website and there's nothing on it about trucks.

What's up at EttSexEtt to get a forum in the Trucks section?

There are some secret´s going on in Stockholm for sure.

I heard it already cost someone an arm.
Top

Wesley, I checked the site myself and I can't find anything about trucks either. Either the site is not up to date or the sales departement are just going bananas. I'll talk to the webmanager first thing tomorrow, and get back. I'm CEO and unfortunately it seems like I'm not 100% about everything that is going on in the company.
Top

Slalomskateboarder.com is so up to date we know what's going on before the companies do!

I forgot that we moved the web departement to India in order to cut costs, and apparently they are preparing for the celebration of Ran Navmi and are out of the office for a few days.

The R&D manager however confirmed that the head machinist lost his left arm a few weeks ago during development on one of our new products, which in his words was "some kind of steering device". I'll get back when I have more info.
Top

Marcus Seyffarth wrote:I forgot that we moved the web departement to India in order to cut costs, and apparently they are preparing for the celebration of Ran Navmi and are out of the office for a few days.

The R&D manager however confirmed that the head machinist lost his left arm a few weeks ago during development on one of our new products, which in his words was "some kind of steering device". I'll get back when I have more info.

Ok so I talked to the manager of the web departement and he in turn had talked to the people in India and the festivities are in full swing it seems so they were not able to help us and had no clue what was going on. Go figure.

So I grabbed the R&D manager again and tried to make him talk but he refused unless I signed a NDA which I didn't. So instead he gave me this flat, brown cardboard package wished me good luck and went for the door.

So I opened up the package and out fell this instruction and lots of lose parts. Naturally I called up the assembly manager, but his voicemail told me he is on paternity leave until August and asked me to call then. Did I authorise that? Probably.

So here I am with all this stuff and no one to help me, this is the last minutes of my work week and I really need to go home even though I haven't provided the info that I told you I would. But please remember that I'm just a simple manager that manages other managers and I don't know how to put stuff like this together, even less have the tools.

So; does anyone know a Swede that could help me out? I've heard they are good with stuff like this. If so, let me know and we'll sort this out next week. Promise!

What will they think of next?

Will they be available at IKEA?
Top

The only precision front trucks I have are three-year old Radikals so I haven't seen what GOG has done lately.

Is this kingpin design new and original? The beefier threads and seating flange look to be damned near indestrustable. Am I correct in assuming this is done to eliminate any possibility of a a kingpin shear?

Where do I order?
No nuts?
Top

We hope and believe that all designs are original in the sense that we have looked at others and tried to improve, not copy.

One aspect that we felt could be improved is the durability, the team behind this are a core of old rocket scientists that can't afford to spend time at the hospital.

Bushings - BYO.
Nuts - we tried to copy the original as close as possible, always some vital part missing.
Order - email me.

As you can see I've got a few of these for Radikals: 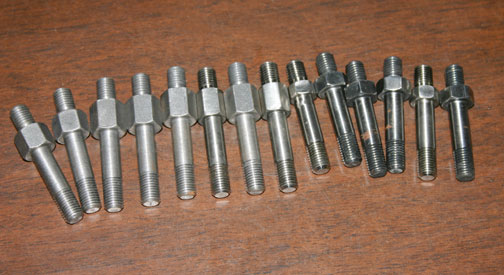 Will these fit on EttSexEtts or is the threading metric?

Wesley, you spelled EttSexEtt correct! You are probably the first in history - Thank you!

Unfortunately for you however the 161 trucks are using the metric system on all parts (see other thread for closer info), so they will not fit...