Brian at Feral Arts makes skim boards, kite boards, sand boards, and skateboards. I've spent a lot of time talking to him about different ideas concerning slalom. One of the big things I was looking for was an easily adjustable wheelbase. I didn't want to remove all the hardware on a truck, move it to a different set of holes, and tighten everything back down.

I got this deck a couple weeks before the Dixie Cup and have been playing around with the setup and finally have it dialed in for me. I've also played around with the idea that you can get an extra set of plates for this deck and change it completely with a couple turns of a wrench.

A Rad front wedged 10 degrees and a Seismic race dewedged 5 degrees with Hotspots:

The front slider slot with a toe stop attached to the front bolt (toestop slides with truck):

Front and back trucks mounted to the slider plates:

Time to switch out the trucks. Only 2 nuts to remove on each truck:

With truck removed you can see the thin rubber gasket I put between the plate and the deck:

All this stuff was taken off in less than 3 minutes:

Different trucks mounted to second set of plates (Tracker Fulltracks with 86a Hotspots):

Giva deck set up as a rocker ditch board. This is an 18" wheelbase with a 6 inch tail:

I love this deck and the versatility it offers. You could easily take this deck to a race and use it for several different courses with only the loosening and tightening of a couple nuts. It's wheelbase can range from 15" to 22".
Top

This and other projects have been possible only because Jeremy, Gary and a host of others offered their tolerance, patience, encouragement and most importantly, friendship over the years.

Thank you very much,

I've been riding an earlier version of this board for the last half of 2008. It's a great board. The track system works well. I can adjust me wheelbase quickly with very little effort. I'm quite spoiled by that. It's a very well crafted board. Both mine and Gary's boards got quite a few looks at Dixie Cup. This has been my favorite slalom board I've owned to date. I would say ever but that would be overkill. If any of you spend any time over at silverfish you have seen my gushing posts on my Cherry board.

If you see me at any races feel free to come up. I'll let you check out my board and even take it for a spin if you wish.
Top

but will you be so willing to share your fried pie?
Evil Potentate
Team Fatboy - all hopped up on goofballs!

Been meaning to talk to you about that...

Are you willing to sub out your pie services?

I was thinking of beast jerky to avoid "Dude, you're so ripping off fatboy!" but seasoned/dried opossum roadkill doesn't appeal to starving people never mind slalom skaters.
Top

I wonder if those of us that travel to slalom races can really get our minds around it. Consider the possibilities;

You could travel to races with one and in extreme cases, maybe two decks. Flat, unmounted decks. Then with some additional plates you mount your trucks just the way you like them, all wedged, wheeled, tightened and ready.

If the race follows what has become our standard format of Tight, Hybrid, GS, you would simply install, in under 5 minutes the two plates with your desired truck set and slide it to either your predetermined wheelbase for the average course or tweak to the course of the day.

#1 How much easier would it be to have a flat deck and half a dozen mounted plates than the golf bag of boards I travel around with? Smaller rental cars, less baggage charges, etc.

#2 Adjust your wheelbase on the fly. I hate to wrench. With this, loosen two bolts, slide, tighten, its nearly as complex as tightening or loosening your trucks.

#3 Mix and Match. What if you decide that the days course needs a little more/less rear stear than your rear radikal or GOG can provide? Slap another plate on. Hell, in a Euro tight you could even pop a front from another combo on the rear if you wanted to, again in the time that it takes to loosen and tighten two short bolts.

Those who view the size of our quiver as an extension of his or her penis might want to go out and buy that monster truck right now.

share pie??? I have never seen or heard of these two words in the same sentence. What a queer notion.

On the subject of fried pies. My Uncle clued me in on a real sweet fried pie hook up. Little old lady made with multiple fruit fillings to choose from and chocolate filling if you wish it.
Top

burton is on this for their 2009 board mountings.C

Chris Favero wrote:burton is on this for their 2009 board mountings.C

Yeah, I know. This keeps getting compared to that now because they're Burton and I'm, well, me.
The first one of these boards was built and published in '05 but nobody really paid attention.
The funny thing about that board was in addition to the track and the cushion gripped deck that stuck your foot, it featured an integrated truck base plate that has a striking resemblance to a truck that came out later.
This track setup isn't as elegant as where they're at with the snow boards but it was chosen because it works on skim, skate, kite, surf and dune boards without setting you back for hardware.

A 3/8" elevator bolt and a composite track is ridiculously cheap.

I pissed another small builder off recently by joking "Dude! You so ripped that design off!"
His skin was not so thick.
Was talking with another buddy this evening who also has a good track record of design and development, it's pretty easy to shake crap like this off after a while.
I've had copyright material and patents go in under company names and in some cases had people snake 'em.
It's just part of the way things work out.
Meanwhile, if the massive world-wide slalom skateboard market consortium leads to industrial espionage, I can only hope the really hot young Russian chick with no 5 O'clock shadow or Adam's apple shows up to do the spying.
Of course the wife will kill here but it'll be flattering not to mention entertaining.
Now Ron, about that pie.....
Can't help it, there are some things in life that are more important.
Top

Other people have invented replaceable, adjustable trucks long ago. 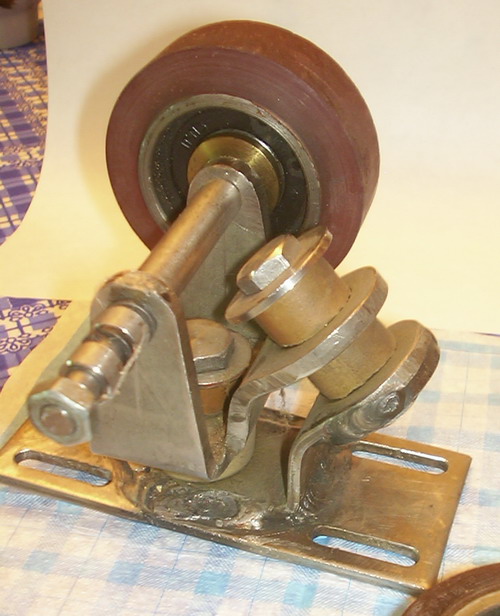 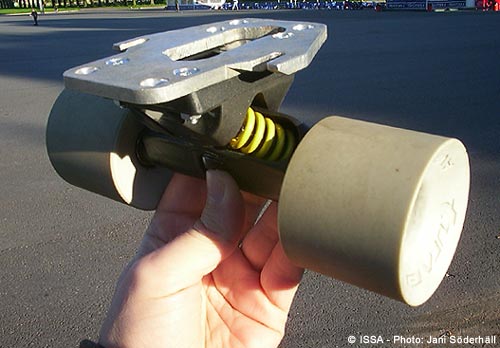 Quick replacement of a set of trucks.


Both of these are made by Anatoly Matsukevich.

I'd seen the base plate before but not the truck.
To delve into wonk a little deeper, the adjustable truck and wheel-base approach has been around since before most of us were kids.
How many have looked at some of the patent apps for what became the standard for what is now considered a truck?
How about the skate that attached to your shoes? Ever tear apart the various sliders mechanisms? Used to piss my dad off to no end when my sisters and I would deconstruct stuff.
Used to flumox him even more when one of my sisters could put things like clocks back together with fewer parts and have it work.
Growing up with gnomes was sweet but I digress.
Another approach was the the lightweight bolt-on rail carrier that could attach to any board. Cut off a length to fit the board and use standard 10/32 hardware and you were done.
This ground gets walked time and again by many different feet.
The only things that seem to stick around are standardized ubiquity.
People will likely still be mounting trucks with 4 bolts long after I'm dead.
Top

All pies aside, I think this is a really cool concept as well as execution. I muled one of these decks down to NC so I got a good look at it - really well done.

Bri - we're gonna hafta talk. After spending over $150 to ship my $hit to and from Dixie, I'm with Joe on the "one board fits most" scenario.

Now, can you also come up with a design for a lighter weight kilt? That would really get my luggage expences down.
Evil Potentate
Team Fatboy - all hopped up on goofballs!

Would you believe I'm working on a kevlar hoodie Ron?
Been playing with a bunch of the fabric recently and got to looking at my hoodie then started scratching my stubble.....

A kevlar kilt would be a breeze.
Ship me one of yours and I'll do a pattern take off.
You can dye kevlar - it's an organic that'll soak up a significant amount of water.
Using a screened wax deposition process to create a pattern that is thin coated with resin could easily be turned to creating a plaid for dying instead.
Might have to look at long term UV exposure and you'll have to live with the equivalent of polyester abrasion threading and fuzz balls but the more I think about it, the more doable it is.

It's this years shoes for industry.
Top

Brian Morgan wrote: A kevlar kilt would be a breeze.

I'll take one in a Morrison plaid (mom's side of the family).
Top

brians approach to shifting trucks back and forth should not be compared to any truck with longholes since there is a certain limitation coming with those trucks.the idea of longholes comes from the 70's where the first longhole trucks surfaced.
as i see it that idea is pretty unique in design.
one thing i totally disagree with is the golfbag syndrome.
it takes max 2 boards for any race.the rest is up to the racer and i am pretty sure that those golfbag carriers would find a way to have the same amount of different decks still as their quiver with the new given option.
brian makes some really nice boards,i followed the threads on sf and apart from all the "pie-talking" i really dig his inventions!!!!!!!!!!!!!!!!!!
Top

Brian's decks have a very nice workman's finish to them. Really nice in person. Kind of like a well made tool.
Top

A first stab at the bowl plate...

using this as the bases for the mold.
There are a few fundamental changes not shown in that image but they aren't ready for the screen test yet.
The new plates will be solid composite.
Top

The new plates will be solid composite.

You know where to send the composite protos when they are done...
Top

Expect to see these decks for sale at races this year.
Top
Post Reply
22 posts • Page 1 of 1